In this post I will describe my marching cubes terrain rendering project, along with the major steps I took to develop it.


What is marching cubes?

Marching cubes is a surface extraction algorithm.  This means that it generates a surface given a density function.  Once we have a surface, we can render any density function as an image using a graphics library such as OpenGL. This was originally developed for medical uses, where a 3d scan could be turned into an image allowing doctors to see the scan more intuitively.


How does it work?


Marching cubes generates a list of triangles present in a voxel ( a 3d pixel ).  Each voxel is the smallest cube 'unit' of 3d space.  Voxels are computed independently given their density values, so we just compute as many voxels as we need to display to the user.  This can and should be parallelized for performance.

There are 3 main steps in the algorithm.

We say that the volume is 'stuff' when the value is > 0, and air when the value is < 0.  So we can represent each corner of a voxel with a bit.  There are 8 corners, which allow for 2^8 = 256 different cubes.  We generate a lookup table that goes from the case (the 8 bytes describing the configuration of the cube) to the number of edges that have mesh points on them.  If this number is 0, we know that we are completely outside or inside the mesh, and thus quit early.

The next step is to loop through each incident edge that a triangle is on, and find the exact position of the vertex through interpolation of the density values.  Simply interpolate the 3d position (and normal) using the densities.  We need to find the spot where the density is 0;  The value that is between air and stuff.

Once we have the positions of the vertices, we use another lookup table that goes from the case number to a list of edges.  We then loop through this list and emit vertices using the interpolated values from before.  This is required to get the vertex points in the right order for drawing.

After implementing the steps above, we can render the surfaces of arbitrary functions.  Some deterministic ones are below. 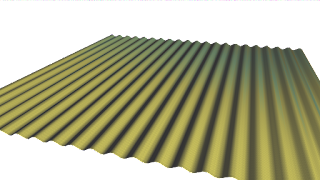 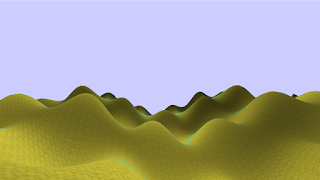 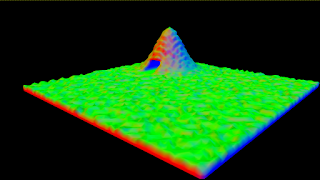 Above we see a sin wave, a mix of sin and cos, and a gaussian with noise.
The more interesting functions use different octaves of random noise to produce complex yet coherent terrain, shown in the video below.

I first implemented this algorithm with a geometry shader.  A geometry shader is a GPU program that takes in verticies and outputs different primitives.  Therefore, my GS was given the voxel position verticies and then outputted multiple triangles.  This was too slow as it was being regenerated each frame.  To solve this, I needed to be able to store the geometry away and then re-render it as if it was a normal mesh.

The compute shader is a standalone shader. It works on arbitrary data, and is not part of the graphics pipeline. It took a very long time, but after learning about all the nuances of OpenGL 4.5, I was able to transform the geometry shader into a compute shader, allowing me to write to a SSBO ( Shader Storage Object Buffer), which I could then render as if it was a normal mesh.  This improved performance a lot.  It also meant that I could render arbitrary meshes that are potentially not on the screen.  This is useful for 'unlimited' terrain rendering, which might cache precomputed chunks for later.

One issue that came up was textures being stretched in the wrong direction.  This is because I was sampling the texture only on the X and Z axes, which meant that a steep slope in the Y direction would stretch badly.
To solve this, I used a technique called tri-planar texturing, which blends together 3 projections of the texture onto the X,Y,Z axes based off a weighted average of the normal.  This prevents any stretching, because it chooses the right plane to project on to for the least amount of stretching.

In order to allow the player to explore the randomized terrain, I needed to implement a memory system that would allow the program to load in new chunks of the terrain, and automatically unload old chunks.  I implemented a system that did this, by picking up chunks that are far away from the user and then moving them to where the user is looking, generating the correct mesh using the compute shader discussed above.

LOD is the idea that a high vertex mesh far away isn't useful, as it takes up only a few pixels of screen space, but takes up a lot of computation. I added in a feature to the renderer that generated chunks with different amounts of detail depending on if it is far or close to the user, by manually changing the amount of voxels in a chunk.  Each voxel then took up more world space as a result, reducing the vertex density.

I uploaded a video to youtube, which shows all these features.

With the project coming to a close, it was time to think of improvements for the project and a perceptual studies that could be implemented in the future.   I participated in the eye tracking perceptual study run by the Tobii masters students. They had me perform two tests.  The first test was straight forward. I simply needed to focus on a highlighted object as it moved across the screen.  There were different shapes and configurations presented.  It was more of a statistical or reaction speed type of study.


The second test dealt more with perception.  It used eye tracking to implement LOD.  The program would draw high polygon meshes around where the I was looking, and low polygon meshes in my peripheral vision.  My goal as a participant was to tell if I could see a 'popping' effect, where the meshes go from low to high detail.  The program sometimes used blurring techniques to hide this effect.

After participating in these studies, I came up with my own perceptual study that was related to the second test I did.  It deals with terrain LOD using eye tracking.

Eye tracking has been used in conjunction with LOD rendering to enhance the perceived quality of a scene while keeping the computational costs low. Since terrain involves a massive amount of geometry, it needs LOD schemes in order to run in real time and still feel expansive and open. Therefore, it is of interest to determine what details users can and can't tell differentiate when traversing through a terrain system.

Can users tell the difference between multiple LOD eye tracking schemes with respect to quality?

If so, how much is this difference?  And in what ways do they perceive the difference ( in quality, responsiveness, ect.)?

The perceptual study aims to address these questions.

The experiment can be run with multiple types of LOD schemes.  There are 3 major schemes that would be of interest to compare, each with their own varying constants, which will have to be determined with expertise.

The constants will be optimized for a specific machine.  Once the distinct set of LOD schemes are determined, a world will be generated before test time, so that each person will see the same environment.  For a fixed amount of time, they will not be able to control the camera.  They will watch as the character in game goes along a set path.  The live rendering will use the participants eye focus to determine the LOD rendering.  After, the user will be allowed to freely roam the scene for a fixed time.

This process will cycle for multiple LOD schemes, and the user will be asked to differentiate between different scenes, which may or may not be the same.

The hybrid rendering approach will create the best user experience by combining the distance based rendering, which saves computation and the eye tracking rendering, which determines the part of the scene that should be given the most detail.

The target group is anybody that has experience in virtual environments, although perceptual experiments are often done on students at universities, so it would be tested most likely on students.

The subject will be shown the pre-generated terrain.  The computer will  automatically take them along a predetermined path in the terrain.  They will then be allowed to freely roam for a fixed time.  Then the user will score the quality of the scene and determine if the current scene was the same as the previous scene.  This process will repeat multiple times, and the user may or may not be shown the same LOD technique twice.

Since the goal is to determine the differences between the perceived LOD schemes, a rating mechanism from 1-10 can be used to get a precise score from the user.  They can then give their thoughts in writing about what was good and bad quality wise.  It would also be of interest to determine if the user can tell if the terrain is any different from the previous run.  This means that two different LOD schemes would look the same, yet one or the other could have vastly different computational costs.
Posted by Unknown at 4:47 AM 1 comment: